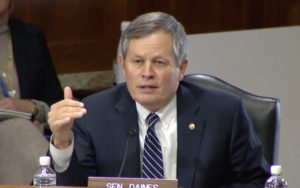 The ENR Committee voted 16-4 to approve S. 2561, a person of the senator’s top forest management priorities that would stop needless litigation from holding up forestry assignments.

“My bipartisan invoice would set an finish to a procedural loophole staying abused by fringe groups in the courts to block critical forest restoration function that is critical for what I like to simply call the 4 W’s: reducing wildfire, preserving wildlife, increasing watersheds, and supporting staff,” Sen. Daines mentioned.

If enacted, S. 2561 would amend the Forest and Rangeland Renewable Methods Preparing Act of 1974 and the Federal Land Policy and Administration Act of 1976 to deliver that a land source management plan or land use plan approved, amended or revised underneath all those acts will not be viewed as to be a continuing federal agency action or constitute a discretionary federal involvement or control for a unique federal purpose, according to the textual content of the bill.

Sen. Daines released the bill in July 2021 to support improve energetic forest administration by aligning consultation prerequisites in Montana with the relaxation of the country, in accordance to his office.

“We should handle our forests ahead of they handle us,” said Sen. Daines following committee passage of the bill. “My forest administration bill passing out of committee is a massive win for Montana and the West, and I will preserve doing the job until finally it gets legislation.”

If enacted, S. 3046 would codify the authority of the U.S. Agriculture Secretary and the U.S. Secretary of the Inside to conduct certain landscape-scale forest restoration initiatives, according to the amended textual content of the invoice.

“Collaboration is important — when we function with each other to style, create and carry out forest administration assignments, we generate more healthy environments and more healthy rural economies,” Sen. Daines claimed. “Glad to see this vital monthly bill transfer ahead.”

Last but not least, the ENR Committee also passed the bipartisan Sunlight River Hydropower Authorization Act, S. 3450, which would authorize the Secretary of the Interior to assemble, operate and retain amenities in Montana’s Sun River project for the intent of hydroelectric power technology, the text of the invoice says. Sen. Daines sponsored the invoice on Jan. 10 with original cosponsor U.S. Sen. Jon Tester (D-MT).

“In Montana we know the importance of an all-of-the-higher than electricity portfolio, and that contains hydropower,” stated Sen. Daines. “This monthly bill will faucet into Montana’s hydropower opportunity and carry careers and profits to our communities.”

Capito joins GOP to introduce Transparency and Honesty in